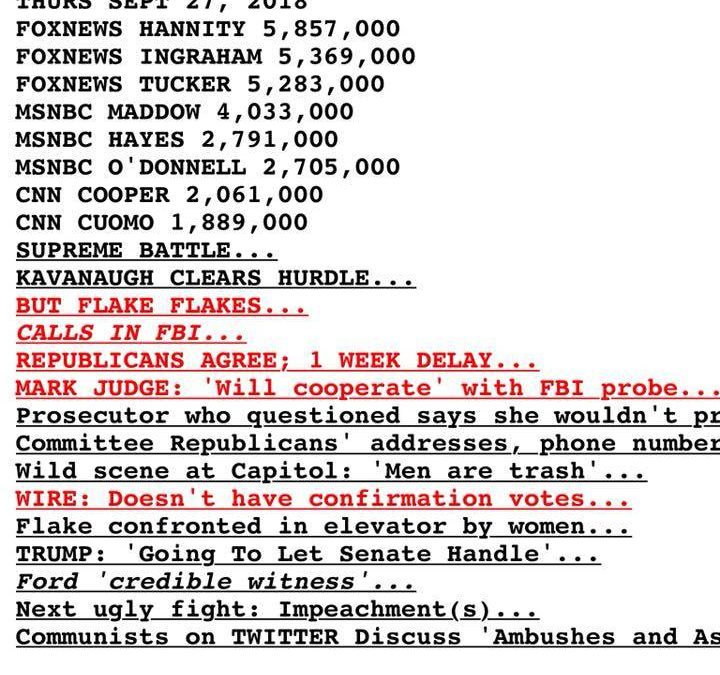 Random Note — Talking points
If you’ve ever wondered what the phrase ‘talking points’ means, think of it as being the same as riding instruction for jockeys. We all know that politicians use talking points every day. They’re issued from party central and are designed to keep everyone on message throughout the daily news cycle on one or more particular topics.
But now as you can see from the first 12 or 18 lines below, cable news channels CNN and MSNBC and the Washington Post and New York Times and their pundits, talking heads and commentariet also have their own, unoriginal, talking points or riding instructions issued from god knows where.
That’s the other thing that this Kavanaugh/Ford charade has exposed. It has lifted the curtain on the the new, white racism. Funny thing is that it’s mainly white men and women referring to “white men” or “old white guys”
They’re incandescent with rage and can barely concealing their self loathing. For years they’ve kept it hidden under a cloak of seemingly mainstream respectability but they can no longer keep it bottled up and have at last stepped out of the closet.
Don’t ever expect clear thinking or cool logic from the enraged, unhinged and rabid left, particularly when they’re throwing their toys out of the cot.
And they wonder why they’re floundering and their ratings tanking with Fox News blitzing them all as the Drudge Report from Thursday indicates.  No one cares or is interested in anything they have to say.
READ ON
They know the optics of 11 white men questioning Dr. Ford … will be so harmful and so damaging to the GOP.” — Areva Martin, CNN legal analyst
“They understand that you have all of these white men who would be questioning this woman … the optics of it would look terrible.” — Gloria Borger, CNN chief political analyst
“Women across this nation should be outraged at what these white men senators are doing to this woman.” — Rep. John Garamendi, D-Calif.
“There has been some discussion of the GOP senators who happened to all be … white men.” — Jim Sciutto, CNN correspondent
“What troubles me is now there are … they’re all white men.” — Jennifer Granholm, former governor of Michigan, on CNN
”You’re seeing on display a metaphor for what this party is, which is basically ignorant white men.” — “Morning Joe” contributor Donny Deutsch
“All these white men … stumbling all over themselves asking her, you know, aggressive and obnoxious questions.” — Asha Rangappa, CNN analyst
“What are those — that collection of old white men going to do?” — Cynthia Alksne, MSNBC contributor
“If she testifies in front of the Judiciary Committee, where 11 members are white men …” — Susan Del Percio, Republican political strategist, on MSNBC
“Once again, it will be all white men on the Republican side of the Judiciary Committee.” — CNN anchor Poppy Harlow
“The optics for Republicans are going to be really tricky … You’ve got all white men on the Republican side here …” — Julie Pace, Washington bureau chief for The Associated Press, on CNN
“The Republicans, it happens to be 11 white men still on that side.” — CNN host John Berman
“The Republicans, it is 11 white men, talk to me about how you think the tone inside this hearing on Monday will be perceived?” — Berman, a few minutes later
“On the Republican side, all 11 are white men.” — Berman, again, same show, several minutes later
“What hasn’t changed is the number of white men questioning, certainly, on the Republican side.” — Dana Bash, CNN chief political correspondent
“The Republican side on the Senate Judiciary Committee is all white men …” — Irin Carmon, senior correspondent for New York Magazine, on MSNBC
“Only this crowd of clueless old white guys …” — The Washington Post’s Jennifer Rubin on Twitter