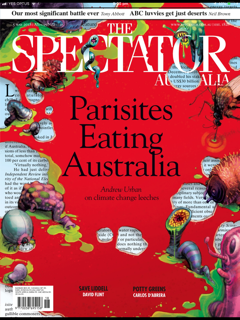 Finkel was asked in June 2017, what difference would it make to the climate if Australia, with CO2 emissions of less than 1.5 per cent of global total, somehow managed to stop emitting 100 per cent of its carbon dioxide. ‘Virtually nothing,’ he admitted --- Such a Parisite is slave to groupthink pressure, feigns principles but shuns evidence-based policy formulation, supports government largesse that appeals to Parisites Plebeian and Academus, lacks courage and fails the nation.
END_OF_DOCUMENT_TOKEN_TO_BE_REPLACED

This is all about shoring up inner city Brisbane seats and harvesting Green votes for Labor. That is, farmers being sacrificed at the altar of Gaia and Green ideology. The Chief Scientist, Dr Bill Burrows who prepared the report for the Queensland government arrived at the conclusion which was the exact opposite of what the government wanted the report to say so the government is proceeding on it’s predetermined course regardless of the damage done with no compensation.
END_OF_DOCUMENT_TOKEN_TO_BE_REPLACED 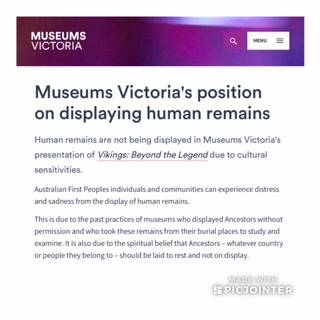 Random Note — This is nothing to do with bogus claims of distress or sadness. It’s about raw power

If Melbourne Museum is prepared to fall for this bogus dictate from aboriginal elites why not simply run a trigger warning (as they do on television) outside the enclosed area to the effect that this program/exhibit features nudity, violence and drug references and human remains --- So a few aboriginals in 21st century who are are a gazillion light years away from and have no connection at all to marauding Vikings from the 8th century of the Northern hemisphere are dictating what will be on display at a public museum in Melbourne in 2018 on the fraudulent claim that it will cause distress and sadness.
END_OF_DOCUMENT_TOKEN_TO_BE_REPLACED

Random Note — The LGBTIQ of Labor politics as they try and out green The Greens.

A Commissioner for Sexual Orientation!!! Gee I bet the Libs didn't see that coming and are going all out 'why didn't we think of that' face palm. Even the work experience kid at Liberal HQ could put together a killer ad on this crap and aim it squarely at middle Australia
END_OF_DOCUMENT_TOKEN_TO_BE_REPLACED

The inter-generational March Through the Institutions and ideological guerrilla war undermining education has been raging for 40 or 50 years and is all but over with perhaps a few pockets of resistance. Check this list below of overhauls, reviews and blueprints over the last 20 years and think about all the money thrown at the problem, think about the jargon, the cliches and ministerial and talking head blather and tell me what’s changed other than that Australia has gone even further backwards.
END_OF_DOCUMENT_TOKEN_TO_BE_REPLACED

This is confirmation that Labor has gone rogue. Gone right off the reservation and is no longer either the Labor Party or The Labour Party. "..Mentions of “intersex” occur 63 times, ahead of those more esoteric concerns such as “wealth” (61 times) and “inequality” (47). Whatever intersex means — or is — it’s also far more important than “ownership” (12 mentions), “production” (18) and “distribution” (10). That “bisexual” out-mentions “poverty”, 31 to 23, says it all... The light on the hill is now more like a strobe disco ball in a gay nightclub.."
END_OF_DOCUMENT_TOKEN_TO_BE_REPLACED

The Long March Continues — Revisionists see an Australia alien to so many of us, Nick Cater

The disfiguring of Captain James Cook’s statue with painted slogans in Sydney last year was not, after all, a criminal act of historical illiteracy, or so we’re being asked to believe. It was a gesture of resistance intended to re-balance the memorial landscape by challenging the cultural power of white Australia, according to historian Lisa Murray. The real vandals were the cleaners who removed it. “Should the graffiti have been removed?” asked Murray. “Is challenging the dominant historical narrative a legitimate part of the monument’s heritage? I ask again; should the graffiti have been removed?”
END_OF_DOCUMENT_TOKEN_TO_BE_REPLACED

For those not very good at joining dots or threading needles that is why we get the anti social behaviour on the streets that we do today.There’s no censure, opprobrium or deterrent
END_OF_DOCUMENT_TOKEN_TO_BE_REPLACED

Labor is wearing it’s best two faces of Janus, with the don’t frighten the horses, ‘more humane’ incantation. It is slippery, duplicitous and deceptive and if it fools you a second time, shame on you.
END_OF_DOCUMENT_TOKEN_TO_BE_REPLACED

‘No one thought Hillary Clinton would blow the election. Top Obama officials at the FBI, DOJ, intelligence agencies, and National Security Council believed in 2015 and 2016 that they could ignore laws with impunity because a protective Clinton administration would soon be in power. Politics have infected these investigations.
END_OF_DOCUMENT_TOKEN_TO_BE_REPLACED
Page 20 of 164« First«...10...1819202122...304050...»Last »